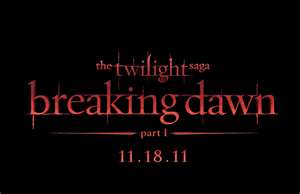 Alright so I’m going to say this right up front so that the haters, with all of their nasty comments, don’t get too upset…

I love The Twilight franchise—big puffy heart love—and I adore Edward Cullen, but (and this is where it gets messy folks) I don’t really care for Robert Pattinson!

Now before you rush to judgment and start sharpening your pitch forks–hear me out.

I’ve seen plenty of interviews with Robert Pattinson (hello, a year ago, I discovered Twilight and I’m not completely embarrassed to admit that I, like every other stalker interested party, Googled, YouTubed and Binged; Twilight, Edward Cullen, hot vampires, and Robert Pattinson, for days) but it wasn’t until the interview last night with my least favorite late night personality that I realized that Edward Cullen and Robert Pattinson are as different as ice cream and hot wax!

My sudden epiphany gave way to even more questions and even more doubt; and I found myself wondering why I hung on Edward’s every word and would have rather listened to the Letterman interview with the TV on mute?  Or why Edward was just so gorgeous that it should be completely illegal and Robert was just a little too…how do I say this nicely—Seattle grunge for my taste.  And then I began wondering if the wine I had after dinner hadn’t been laced with something because I was starting to sound like one of the haters.

I was starting to freak out with the possibility that I could be turning into a hater—because the like, sparkly vampire haters are the worst—or so my 12 year old says.  So I turned to Travis,  the only other adult in the room, ( and yeah, I know if you’re actually familiar with Travis or “HotSizzle” as he prefers to be called, you’re probably beginning to wonder if the wine wasn’t laced twice) and this is how the conversation went down…

Me:  Trav is it just me or is Robert Pattinson kinda boring?  And not really as cute as he is when he’s Edward?  And really all that funny either?  (beginning to feel like I drank Haterade instead of wine, after dinner)

Me:  (looking at him wondering what the hell his accent had to do with anything) Um, that’s not really what I said.

Me:  Um, you mean he’s British? (realizing that Travis was the one who spiked the Haterade, I mean wine)

Travis:  Yeah, he’s like from British or something right?

And it only went downhill from there so I’ll spare you the play by play of the rest of our conversation, but it appeared that even Travis (in his own completely messed up way) agreed with me. But I couldn’t really adore Robert Pattinson when he was the sparkly, gorgeous, way too young for me, Edward Cullen and dislike Robert Pattinson when he was boring, completely unfunny, greasy, still way too young for me, Robert Pattinson…could I?  I made a little graphic to help you decide if you agree–or if I’m a just a lil’ tipsy from the Haterade (yeah, I’m full-on admitting it now). 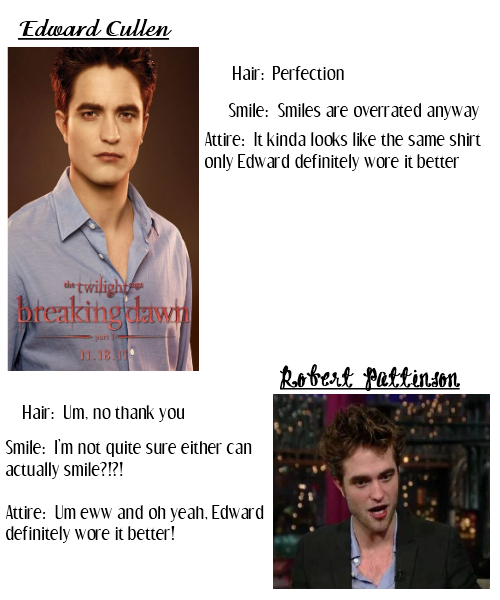 Maybe it’s just me, but I kind of feel like Robert Pattinson will just never live up to the Edward Cullen character he made famous and that’s a little disappointing.  Now don’t get me wrong I am totally contributing my $12 to the Breaking Dawn pot this weekend…because, duh, it’s Edward Cullen.

I can’t possibly be alone in this–am I?  I mean, is Robert Pattinson as completely stalk worthy as Edward Cullen would be?  Come on all you Twihards…let me have it!  I kinda did ask for it!

View BerasMerah.Com in a larger map